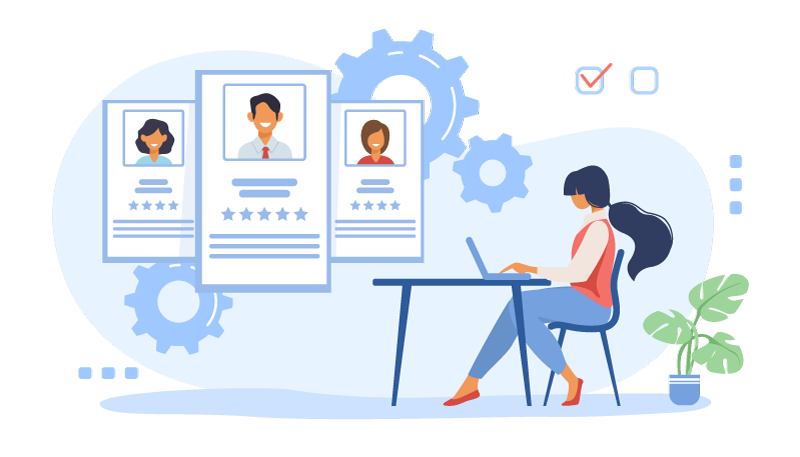 Make connections with multiple hiring managers looking to find the right people for your job openings.

Addressing the IT talent gap

IT Staffing and Consulting Company in India

There is a lack of highly skilled technical professionals to fill the gap of any organization. Yet there is no shortage of demanding technical projects and environments requiring the hands-on attention of specific IT challenges that require a specialist. And that leads you to competing for the IT talent to reach your business goal and technology goal. Fortunately that kind of talent is available on demand at ImaAppweb.

Consultants are available across multiple technologies to assist with short & long term project based work and are engaged to assist with the engineering and design of the solution.

Consultants are engaged on-site to augment the client’s current IT support staff to assist either in a short-term or long-term capacity.

If a client chooses, we can also recruit resources to be placed at a client site as a full-time staff member.

Offshore Remote Teams are committed to work as your dedicated team, working from our location. If you are looking for 100% control over your resources & priorities, having someone looking after for you.

We define the expected deliverables and work on fixed timelines and fixed budgets with well-defined scope and specifications on all the projects and campaigns.

We provide best-in-class landing pages, website banners, and email templates. You can simply order these assets online for a quick turnaround time.

Want Transparency in IT Staffing & Consulting

In recruiting voting operations staff, strict adherence to guidelines that promote transparency in the appointment process is necessary. The basic guarantees of transparency are in the application of the following:

• a documented process of selection through equitable, written assessment of applicants against the relevant selection criteria, with reasons provided for decisions to employ or not to employ;

• a procedure for open and equitable resolution of any complaints about voting operations staff selection processes.

Transparency will be further enhanced by a genuine public invitation for applications for employment as voting operations staff.

Ensuring transparency in recruitment will create some additional workload in soliciting applications, screening the applications, and then conducting a proper selection process.

The most compelling benefit of transparency in recruitment is that it promotes public confidence in the impartiality and skill of voting operations officials, and it assists the effective operation of voting stations and count centres by selection of the most qualified available staff.

Transparency is also necessary to ensure that:

• the appointment process is not manipulated so voting station staff who will support a particular political viewpoint in their official duties are appointed;

• patronage in voting station staff appointments does not result in the engagement of staff who do not have the ability to undertake their tasks.

Large numbers of staff need to be recruited as voting station and counting officials. There can be a temptation, particularly where recruitment is decentralised, to appoint family members, friends, or associates, regardless of their suitability for the positions. In regions of high unemployment, where voting operations employment may be the only paid work opportunity available for some time, the temptation is greater.

(This is a different scenario from that where official government policy may reasonably give preference to suitably qualified unemployed persons as voting station official recruits.) Different jurisdictions take different approaches to prevent patronage and particularly nepotism in voting station official appointments, resulting in the appointment of unsuitable staff. When determining appropriate controls, the desirable recruitment outcome must be considered--to engage persons who are most effective at undertaking the required tasks in an impartial manner, and whose appointment is free of corruption. Who a prospective voting station official knows or is related to need not necessarily be a hindrance to recruitment.

The basic control is in the intensity of regional or central monitoring of the recruitment process: in ensuring that those selected for training meet formally defined basic skill criteria, and that any complaints about bias in recruitment are reviewed openly and quickly.

Secondary controls are at the training stage, where unsuitable patronage recruits may be disqualified (this could be an ineffective control in cascade training systems, where the trainer and the recruiter may well be the same person).

Particular controls against nepotism in recruitment of voting operations staff used in some jurisdictions include:

• prohibition of relatives working within the same voting station;

Perceptions of integrity would be equally well served by requiring that the selection process provide proof of superior merit, accompanied by approval of appointment by an independent senior electoral management body official.

• overall transparency in recruitment processes as detailed above;

• specific disqualification of any person who is a member of a political party, an active supporter of any political party or candidate for election, or has taken an active role in the political campaign for the election.

While these disqualifications are an integrity/transparency check on recruitment, care must be taken that they are not used in a partisan manner to unfairlyprevent people with alleged connections to opposition parties from serving as voting station officials. The checks against this lie in the recruitment process meeting overall transparency requirements and in the independence of complaint and review mechanisms.

Control of political influence within staff appointments is of a different nature in systems where voting station officials are appointed on the basis of their affiliation with a political party. Rigorous mechanisms are required to ensure that at each voting station, different political interests are equitably represented amongst voting station staff.

This is a system that may be appropriate in societies where, historically, impartial decisions have been reached through the checks and balances provided by competing interests, with a strong background of institutional integrity, and where there are few stable organised political forces.

In post conflict situation is may be most practicable to appoint voting station officials as representatives of particular political interests, where they act as checks and balances on each other and enhance community acceptance of the integrity of voting operations. In post-conflict environments, where the conflict has been nationality or party based, there is little likelihood of the acceptance by the whole community of the independence of any appointed voting station official.

Appointment of equal numbers of officials on a nationality or party basis to each voting station, and ensuring that procedures require consultation and agreement between the various interests represented may be the most practicable, though not efficient, means of neutralising inherent community distrusts.

In areas still under traditional leadership, or in societies where there are strong familial support responsibilities or powers of official patronage and allegiance still held by clan leaders, it may be difficult to impose open and transparent selection on voting station official recruitment.

However, if this is not possible, the —option to bring in full teams of transparently appointed voting station officials from outside the area--may have negative affects on election co-operation, voter turnout, and ability to provide voter service in the area. It should only be contemplated after very careful consideration of its possible effects.

The only effective solutions may be to pay special attention to impartiality issues during training, and strictly monitor voting station and count operations, by the electoral management body, party and candidate representatives, and observers.

Start Growing With Ima Appweb's IT Staffing and Consulting Today

With tools to make every part of your process more human and a support team excited to help you, getting started with digital transformation has never been easier.

Explore and learn more about digital transformation services, get to know the pricing and deliverables.